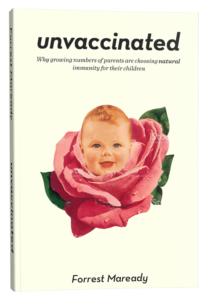 When I first heard that people were purposefully not vaccinating their children, I was shocked. Vaccines have been described as the most incredible medical invention of all time—a miracle of science and technology that has saved the lives of untold millions. I couldn’t believe that seemingly intelligent, educated parents were purposefully foregoing vaccines for their children, and in fact, were so convinced these medical procedures were harming us, they would go out of their way to try to convince others.

When a close friend of mine told me that his infant child was going to be unvaccinated, I thought he was completely insane. After much coaxing, he convinced me to do my own research and challenge him on his beliefs. A few months later, I had read things about vaccines and disease that I had never heard before. Things that no one—including our pediatrician—had ever mentioned. I was convinced there was a giant conspiracy to try and discredit vaccines, but after diving headfirst into recent scientific research seldom mentioned in the news, I eventually came to believe much differently about vaccines and the diseases they are supposed to protect us from.

This short book will take you along the same journey I made as I transitioned from a dedicated vaccinating parent to someone who now questions whether any vaccines are actually worth the risk, even in third world countries. It barely scratches the surface of this, the greatest debate of our time, but if nothing else, will give you a clear idea as to why an increasing number of parents are raising their children unvaccinated.

I could not recommend this book more! Its a great start to learning about vaccines. Its easy to read (and quick, only took me a couple hours, even with kids interruptions) and is well sourced and explained.

This is a short, light read, packed with imperative information. A perfect gift for parents to be. I wish someone would have handed me a copy of this book before my kids were born. Thanks Forrest!

I highly recommend this book for anyone starting to question vaccines or to give as a gift to new parents. Very easy, quick read!

I am so grateful to have read this book. All of my doubts have subsided. Thank you so much for telling my story and I’m sure so many other parents. It’s nice to know that we aren’t alone in these feelings and that we aren’t wrong to trust our instincts!

I’m a slow reader and on a day when I took a semi- truck to a shop, attended a parenting class, and spent several hours at a mall with my wife and 3 month old baby boy, I was able to read this book in one day. This is a very simple read. If you are just starting to question vaccines or even if you aren’t and you just want to know what the fuss is really all about, this book lays out the case in a very well organized manner that flows very naturally.

Great, short read on the vaccine related info that most people are not aware of. Easy to understand and a must-read for everyone!