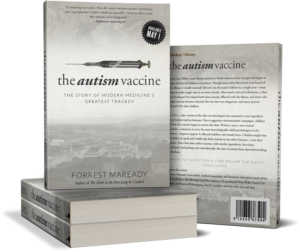 In the late 1800s, a new disease arrived in North America from Europe and began to claim the lives of children everywhere. Though most today have never even heard of this illness, it would routinely kill over ten thousand children in a single year—more than polio might take in an entire decade. After much trial and tribulation, a shot was developed that helped both those already afflicted with the illness, and those who might one day become infected. But the shot was dangerous, and many parents refused it for their children.

In 1932, a safer version of the shot was developed, but contained a new ingredient never before tried on humans. Due to aggressive immunization campaigns, children all over the country began to receive this shot. Within a year, a new mental disorder—unknown to even the most knowledgeable child psychologists in the country—began to appear. It affected toddlers, and mostly boys. Children were losing the ability to speak and would take little interest in any other humans—even their parents.

The Autism Vaccine chronicles the story of two of these children—one known throughout the world, the other completely unknown until recently—and why modern medicine’s attempts to explain what happened to them have so far come up short.

EARLY PRAISE FOR THE AUTISM VACCINE

Before I get too deep in the The Autism Vaccine, I wanted to break away for a minute and commend you as a masterful writer and storyteller.

I just finished reading @forrestmaready’s new book, The Autism Vaccine. It is a masterpiece. Order 10 copies and give it to your friends.

Bought your book The Autism Vaccine! Another fantastic, eye-opening compilation of vaccine history which reads like a fast-paced novel. Thank you very much!

I preordered The Autism Vaccine. Read it in one sitting! Don’t walk… RUN to get this book.

So happy I discovered your books! Thank you for making things so interesting!

Forrest is working on a documentary and book to be released soon which will complete a thematic trilogy of infection and disease that started with The Moth in the Iron Lung and The Autism Vaccine. Sign-up to be notified about this exciting new project!