A Thrilling Novel from Beginning to End 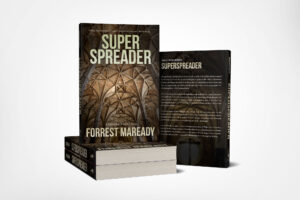 Thomas Finch, a rebellious doctor, finds himself the subject of a global manhunt, wanted for the murder of one of the most beloved figures in public health. When a miraculous healing technology is unveiled, set to forever fuse the relationship between science and faith, its founders make the doctor a deal he can’t refuse: they will cure his daughter of a debilitating injury—if he’ll turn himself in.

With a disturbing pattern of suicides beginning to appear, the doctor—already suspicious of a world-wide vaccination program pushed on an unsuspecting public in the wake of a recent pandemic—begins to believe another, more nefarious, plan is underway; his harrowing adventure to uncover and stop it frustrated by a heart condition he fears could kill him at any moment.

Best-selling author Forrest Maready takes a break from his non-fiction work for this stunning thriller that pits the lone doctor, hated by many for his unorthodox views, against the global powers that seek to control. Super Spreader is a wild ride from page one all the way to the thrilling end.